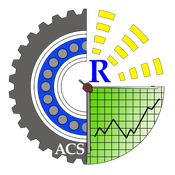 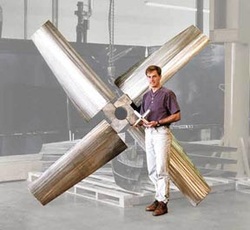 SHARPE MIXERS has developed an entire family of energy efficient hydrofoil-blade impellers, known as "HYFLOS". Designed with various blade widths, shapes and angles, the two most common are the HYFLO 218 (also known as the Hyflo II) and the HYFLO 312. The HYFLO 218 is a universal energy efficient low blade angle impeller, and can now be purchased from our online store! 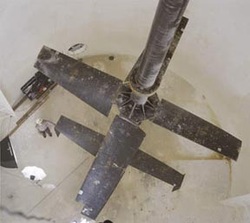 In a similar way that an airplane wing will go into a stalled condition if the angle of attack is too great, the same can occur with fluid impellers. At excessive blade angles, the flow will tend to separate from the backside of the blade and eddies behind the leading edge of the blade. This is an indication that a stalling condition exists accompanied by increasing hydraulic shear. The HYFLO 218 impeller is optimized to operate in a non- stalled condition over the widest possible range of operating conditions.

The HYFLO 218 stands out from the competition in the way each impeller is fine tuned to each application. SHARPE MIXERS calculates the fluid velocity over the turbine blades to determine the shape and curvature that will be most efficient. The result is a custom designed and fabricated impeller providing optimum pumping capacity at minimum shear. The HYFLO 218 has proven to be successful in thousands of applications, from 4" to 174" diameters.

The more specialized HYFLO 312 has a lower blade angle and is often standard for side entering paper stock applications, but can be used when applicable for blending, solids suspension and heat transfer.

The wide blade Hyflo 518 is built for higher viscosity applications, or where maximum flow must be attained with a limited diameter impeller.

This family of impellers pumps considerably more per horsepower than other turbines because of their hydrofoil design. However, they are very sensitive to higher viscosities and their performance characteristics should be compared with axial flow turbines at viscosities over 3,000 centipoises.